For the record, my weblog and journal are likely to overlap somewhat in covering the social content of my life, since the people I'm socializing with are almost entirely geeks at the moment. If that matters to you,

crschmidt_tech might be of interest for the next week or so. Arrival at FOSS4G is the first in that vein.

So, I mentioned that Schuyler bought me a new lens, and I got my first chance to use it last night. I'm already in love.

Over the past year, I'd noticed a steady decline in my photo taking, which I felt was mostly tied to the fact that I hadn't really been taking a lot of pictures that I was happy with. It seemed like everything was coming out fuzzy or blurry, and I figured I'd just lost the knack for taking pictures. Getting a new lens has made me realize that this isn't really true: In fact, the problem here is (at least in part) the result of my choice of tool.

When I first got my camera, it had the standard kit lens on it: 18-55mm f/3.5->f/5.6. Not a great low-light lens, but it was a Canon, so it was a pretty decent quality lens. Right before I was leaving for our honeymoon last August, I realized it had broken, and rushed out to get a new lens with less than 24 hours before our trip. This meant my options were limited; I was essentially tied to the local Wolf Camera, and had a low budget. As a result, I bought what was available in my price range, which ended up being a Quantaray 18-125mm lens.

Googling this lens, one of the first hits has a succinct review attached: "It's a soccer mom lens. Not only that, it's about the the cheapest thing you could put on your camera. Don't put cheap crappy lenses on your nice DSLR - you'll end up with worse pictures than if you had bought a $300 digicam."

Still, I figured that at the point where I noticed the lens getting in my way, I'd get a new one, and at least I'd have something for my trip. I'm not typically one to blame my tools: I hadn't put any serious effort towards my photography for quite a while, so I was largely convinced the problem was simply me. Until I tried looking at the photos that I took at the same time as

gandalfgreyhame at Jess's birthday party... and realized that I was framing, and taking, the same shots, and getting nothing out of it. When I asked David, he mentioned that he just realized that he couldn't really shoot anything good with the lens all the way open, because the photos just *ended up blurry*. 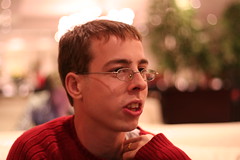 Thinking back on it more, I realized that my lack of photo taking was almost directly tied to around the time I got married -- around the time I'd killed my Canon lens. With that in mind -- and a less than $100 lens available to me -- I decided that it was possible that my tools really were getting in the way.

In recent photos taken, I've been getting about 1 good shot in 10. With the new lens attached to my camera, yesterday I took 56 good shots out of 103.

So, essentially overnight, I've gone from what I consider a 10% success rate with photos to a 50% success rate with photos. Some of that is certainly likely to be not directly related to the tools, but at least some portion of it is, and given the feedback I'm seeing on the cheap-o lens I have, I guess I shouldn't be surprised. Still, this change has made photography fun again.

Heading up Table Mountain today, and looking forward to getting some pretty pictures. When I do, I'll add them to my FOSS4G 2008 set.

No pictures yet, but we climbed up Table Mountain earlier today. It was a great hike -- steep, but well maintained with rock steps cut out most of the way up, and beautiful views. I also have a number of shots from the top.

It was a good time. Also took the cable car back down, so that was fun too.

Today, I climbed a mountain. 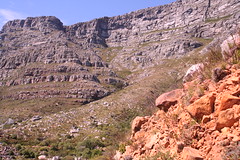